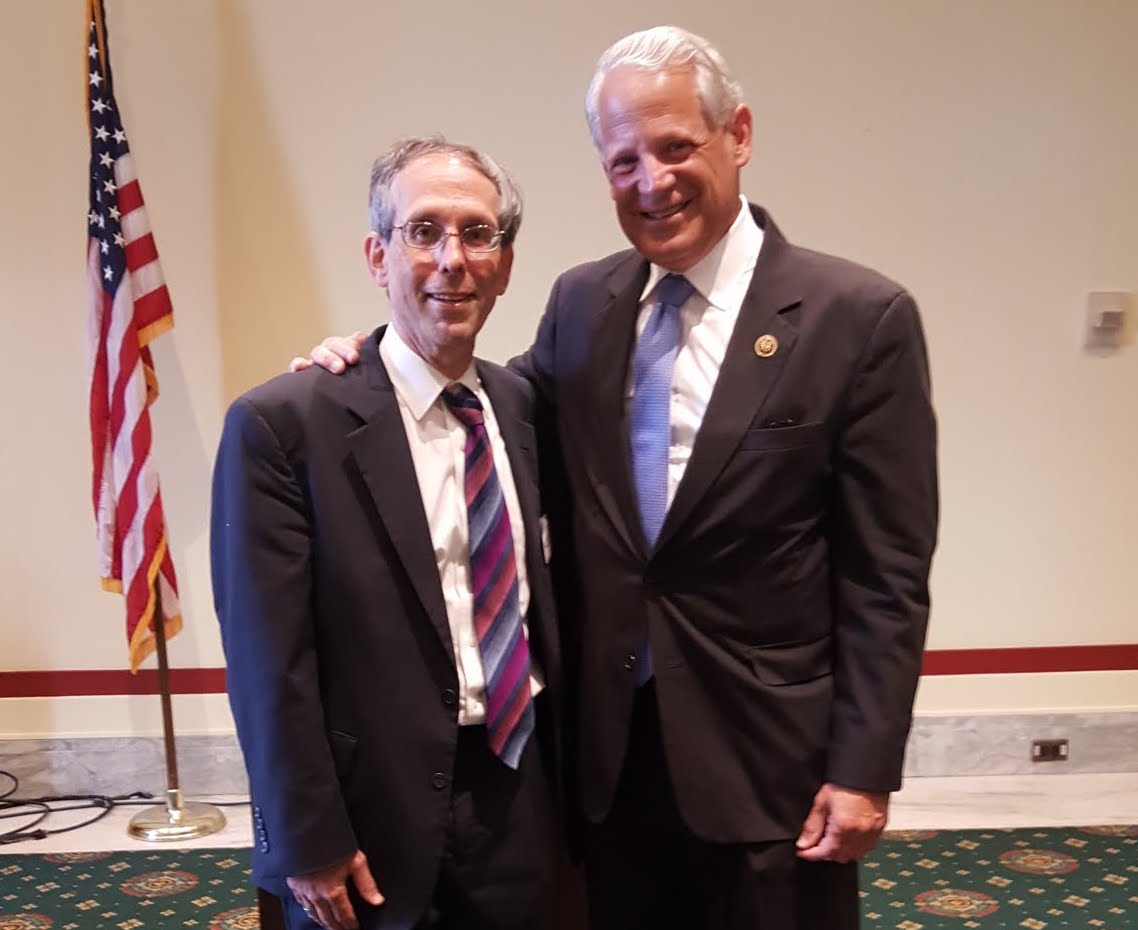 Yesterday in Washington DC, I joined a small group of Long Island colleagues and distinguished Jews (including the President of Long Island University) to participate in a conference on combating anti-Semitism. The one day conference was initiated and coordinated by Congressman Steve Israel.

First, a little background.  By virtue of escalating anti-Semitic incidents around the world and in the US (included college campuses). Congressman Israel co-founded a Bipartisian Task Force for Combating Anti-Semitism.  He has labored to mobilize Congress; creating a legislative vehicle for addressing anti-Semitic issues.  He has also worked closely with foreign officials and diplomats to address global concern.  As part of community outreach, the Congressman invited Long Island Rabbis and several other community leaders for a one day conference in DC.

We spend the morning viewing two of the special exhibits in the US Holocaust Museum:  The first exhibit is entitled Some Were Neighbors; Collaboration and Complicity in the Holocaust. The purpose of this exhibit was not to display what happened, but how and why. The exhibit centers around geographical locations rather than chronology. There are two, central themes in Some Were Neighbors:

#1. People had a choice.  In some cases, individuals informed on the Jews; in other cases they did not.  Many panels depicted Jews, who were put on public display in front of a town’s general population.  The exhibit called attention not only to Nazi aggression, but to all those who-just by observing-complied with the Nazis.  The exhibit included information about towns auctioning off Jewish articles confiscated when the Jews were expelled from their homes.  Most important, the exhibit suggests that compliance came in all forms; purchasing an object formally owned by Jews is an expression of compliance.

#2.  People viewing this exhibit (most of the people attending throughout the year are not Jewish) must ask themselves the following question:  How do we avoid such behavior today? Since the Museum is an American museum, the special exhibit calls attention to hot spots around the world where various minorities suffer degradation.

The second exhibit is entitled: A Dangerous Lie: The Protocols of the Elders of Zion. Protocols is a document supposedly written by Jews, who unveil a plan to take over the world both politically and economically.  Even though many people admitted that Protocols was a fake; it served a utilitarian purpose for anyone wanting to promote anti-Semitism. From the wide distribution of Protocols, it becomes clear how anti-Semitism was globally embraced.

Historian Aleisa Fishman then spoke to us about her museum work in creating public awareness programs (about anti-Semitism) for students, educators and the public. She addressed two of the Museum’s objectives:

#1. To demonstrate how state-sponsored anti-Semitism can lead to violence

Focus is placed on Europe, where de-legitimizing Israel is becoming more common. The Museum is reaching out to educators throughout Europe and the Middle East; to both identify the sources of anti-Semitism and to address the issues.  It is interesting that the Museum has translated much of its work, its documents and its media resources into various languages.  I like the fact that a fundamental premise of the Museum is that it is an American Museum; with the understanding that the Holocaust was a global tragedy and not just a Jewish one. It is also reassuring to learn how the Museum is reaching out to Muslim communities-including Iran; in an effort to educate and to dialogue.

The rest of the day we spent at the Capitol.  Congressman Israel spoke about his efforts to form the bipartisan task force.  As he has done extensive research into what motivates the electorate.  the Congressman shared a few observations:

The growing insecurity and animosity can breed hate; some of that hate (as in the past) will be directed toward Jews.  Institutions like Congress can work to help address anti-Semitism in our communities and on our campuses.  It is one area where Democrats and Republicans are pledging to work together. The participation of six congressmen/women later in the afternoon attests to such partnership (more on that later).

Ron Dermer, Israel’s Ambassador to the US (and co-author with Natan Sharansky of a book The  Case For Democracy: The Power Of Freedom to Overcome Tyranny And Terror), recalled how the decades after the Holocaust were an aberration concerning anti-Semitism.  They were an aberration because anti-Semitism was in decline.  The State of Israel was the object of global respect.  Today, people are turning back to old hatreds.  The Ambassador then spoke about the three D’s:  Demonization of Israel, the double standard toward Israel, and the attempted denial of Israel’s right to exist. He gave an illustration of a recent Nobel prize winner who compared Gaza to Auschwitz.  In the one hundred years of Israeli-Palestinian conflict, 22,000 have been killed (a tragic and significant number which should not be minimized).  In Auschwitz, each day 10,000 Jews were murdered.  There is no comparison; yet by virtue of BDS, Gaza etc. Israel has become an enemy of humanity.  On a positive note, Dermer cited how Israel is maintaining more ties to nations around the globe.  PM Netanyahu, for example, will soon be the first Israeli PM in over twenty years to visit Africa.  Ambassador Dermer recently hosted an LGBT reception;  something no other Middle East nation would do. He argued that countries need to either stand with Israel and its liberal and progressive values; or stand with enemies of such thinking. In his remarks he mentioned how Israel has the ability to fight back; not just militarily but by assertively calling attention to anti-Semites and to anti-Semitic acts throughout the globe.

Finally, we heard from six Congressmen/women who are working with Steve Israel on the task force.  Three of the representatives were Democrats: Rep. Boyle from Pennsylvania, Rep. Schiff from California, and Rep. Lowey from New York. The other three were Republicans:  Rep. Roskam from Illinois, Rep. Ros-Lehtinen from Florida, and Rep. Cole from Oklahoma.  ALL six work closely with Congressman Israel to address anti-Semitism at home and world wide.  Each spoke briefly with our group.  Rep. Boyle had just returned from the UN, where he met with our Ambassador to the UN, Samantha Powers, to speak about a potential upcoming vote which will (again) be imbalanced against Israel.  He spoke about Israel as a shining light in areas ranging from academic freedom to support for the LGBT community.  Such freedom does not exist elsewhere in the Middle East.  He has called for no taxpayer money to any organization favoring BDS.

Rep. Roskam spoke about a conversation he had with Natan Sharansky.  He asked Sharansky if President Reagan’s ‘Evil Empire’ comment made its way to Sharansky; who at the time was imprisoned in the Gulag.  Sharansky told him that the slogan was a source of inspiration to all the Soviet Jewish dissidents.  Roskam then argued that we need to apply such a slogan to Iran, and to act accordingly.   He urged Americans to write Boeing; in light of Boeing’s plan to sell planes to Iran.  How can Boeing in good conscience deal with a nefarious regime?

Rep. Shiff was just in Gaza to check on the Hamas tunnels; he was in France to address episodes of hate in Paris.

Rep. Cole joined Congressman Israel in a joint measure to re-affirm Israel’s responsibility to respond to Gaza. He also shared the irony of Saudi Arabia being Israel’s ally in combating the terror in Iran.

Rep. Lowey spoke about direct talks between Israel and the Palestinians as the only legitimate way for peace to emerge.  She expressed concern about anti-Semitic fervor on campuses like Tufts, Brandeis and Hunter in New York. Since one of the conference participants yesterday is the President of LIU, Rep. Lowey called for an open dialogue among college presidents; to address BDS and other growing anti-Jewish concerns.

Rep. Ros-Lehtinen addressed issues like BDS, the college campus, and the need to curtail American money being directed toward radical anti-Israel organizations. The six representatives; all influential on important Congressional committees, are working on various ways to better educate and inform Americans about the dangers of anti-Semitism on campus and throughout the country.  Although it is evident to me that reaching across the aisle is not standard behavior in Congress; combating anti-Semitism has brought these representatives together for a common purpose.

Today, in an email to Congressman Israel’s staff, I offered a suggestion. Our meetings yesterday were illuminating, but they were merely a first step.  In New York and elsewhere, the subject of anti-Semitism (and intolerance in general) needs to be formalized in more concrete ways.  For example, we need to design curricula which will be taught in schools; from elementary through high school.  Part of the curricula must involve parents.  In Great Neck, as the demographics shift and the population becomes more diverse, such curricula will be of even great value-for both students and parents.  Our student AND our parents need to be better informed.  Rep. Lowey suggested a conference for university presidents in NY, as an initial step toward addressed some of the anti-Semitic fervor on campus. These ideas and suggestions need to be duplicated nation wide.

A final thought:  Congressman Israel took us for an extensive tour of the Capitol, but his tour was not of the standard variety.  He told stories and historical anecdotes (all well researched for purpose of verification). He shared a perspective about the Capitol, and about our national government, which I found noteworthy.  The Congressman introduced the tour by speaking about imperfection. The Preamble of our Constitution includes the phrase:  in order to create a more perfect Union.

What nation or kingdom so publicly highlights its imperfections?

He suggested that the Preamble is a stunning admission of human frailty.  It leads us to a motivational question: How can we make things better?  He illustrated his point by taking us up the same stairs which each President climbs en route to delivering the State of the Union.  The steps are stained and a little unimpressive; far from the sparkling or opulent passage way one might expect in a Capitol building.  He told us the story about those steps (for another conversation), but his point was this: For an institution as grand as Congress; for a stairwell climbed by every President about to deliver the State of the Union, those stairs should be sparkling.  The steps remind us of our imperfections; and such can be a motivation for Congress and our government to better the lives of our citizens by legislating fairly and effectively.

In light of the conference about anti-Semitism, it is evident that we have a long way to go before achieving anything close to perfection. However, the fact that members of Congress are partnering to address such a serious topic is a reassuring sign that in some areas of Congressional activity at least, a positive dialogue has begun.