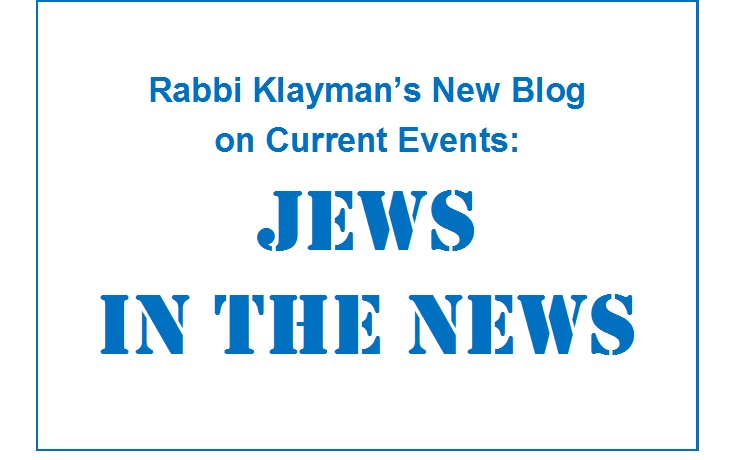 On the first Monday of every month, I lead a discussion in the North Shore Towers restaurant.  The central topic is Jews in the News.  As many of the issues deserve great consideration, I wanted to present the issues we discussed on Monday, May 7.  The following is an abridged version of the topics introduced, along with my personal observations:

A recent study commissioned by the Conference on Jewish Material Claims Against Germany revealed that many adults lack basic knowledge of the Holocaust. A significant percentage of Americans-and millennials in particular:

Although an overwhelming majority added that the Holocaust should be taught in schools; the study suggests that with a 70- year distance between the Holocaust and today, our younger generations know little about the facts. Holocaust educators suggest that the most effective way to teach about the Holocaust is through testimony of survivors.  Because the survivor generation is fading away, we are making use of modern technology to present survivor testimony through innovative, technological means.  This will enable the younger generations to hear testimony even if the survivors are no longer alive.

My Observations:      No matter how effective the testimonies and the memorials; without a vibrant American Jewish community we risk completing what Hitler began.  Therefore, I believe that over the next decade, Jewish organizations like UJA must allocate most of their funds toward enhancing Jewish culture in America. Providing major incentives (free Jewish education, free trips to Israel and significant scholarships for college), should be up for serious consideration.  My thinking is that we should create a variety of cultural tracks from which Jewish parents and their children can choose.  Those tracks can focus on ritual, Israel, Jewish History, social action (study and doing), Torah reading skills, Jewish current events and other subjects or themes which can help revive Jewish life in the US.  Such a plan will never happen in my estimation; as long as we think business as usual.   We have run out of time for status quo.  Unless the American Jewish leadership wakes up and begins to think in visionary terms, I am afraid present patterns will continue.

By now, the forced resignation of House Chaplain Patrick Conroy has been rescinded. As of my writing, no one knows for sure why Conroy was forced to resign; but general thinking is that he delivered an unfavorable prayer about the GOP tax bill. Here is part of his text:

May all members be mindful that the institutions and structures of our great Nation guarantees the opportunities that have allowed some to achieve great success, while others continue to struggle. May their efforts these days guarantee that there are not winners and losers under new tax laws, but benefits balanced and shared by all Americans.

My observations:      God is not a political partisan and  I appreciate the Johnson Amendment (withholding tax exempt status from any religious institution whose minister advocates for a particular political candidate).  Nevertheless, clergy must often represent the moral voice and conscience of the people.  We have responsibility to speak out about social and economic issues; even if they intimate political leanings toward a designated party or candidate. Last week’s Torah reading of Emor highlighted the command to leave a portion of our agricultural produce for the poor.  The Torah constantly refers to helping the poor, the homeless and the economically challenged.  I applaud Chaplain Conroy for reminding our legislators about their responsibility toward all citizens. Such is the message Judaism conveys; and if that smacks of political partisanship, so be it!

► Peter Beinart article in Forward: American Jews Have Abandoned Gaza – And the Truth

In the Forward, Peter Beinart wrote a commentary highly critical of Israel’s ongoing actions in Gaza.  Among his criticisms:

In a response to Beinart, Ambassador Alan Baker (formerly Israel’s Ambassador to Canada) made the following counter

My Observations:      No nation which perceived as an occupier can look good.  Israel has gone to great lengths to prevent civilian tragedies and to provide essential services.  There are certainly imperfections within the Israeli government and its policies toward Gaza; and yes, Israel is not blameless in creating an environment which led to the formation of Hamas and other terrorist organizations.  Yet to claim moral equivalency and to hold Israel equally accountable (with Hamas) for Gaza is a distortion of the truth. Israel tried to withdraw from Gaza (and did); but over the years has provided basic needs so that Gaza’s citizens could live.  Israel has made exhaustive attempts to avoid civilian tragedies; while Hamas and others exploit Gaza to gain favor with the world.

Beinart’s article will lead people to believe that everything he writes is factually true.  Criticism of Israel, while sometimes justified, is far out of proportion. As Israel is an easy and attractive target, anyone who reads such an article or hears demonstrators on college campuses will think the anti-Israel criticism is completely justified.  Anyone seeing photos from Gaza-and not knowing the source of those photos- will believe likewise.  Therefore, when you read an article like Beinart’s, do some research into the facts.  Claiming that Israel wishes to deny food or water is simply not true.

►  A Critical and Valid Look at Israel by Notable Israelis

For Yom HaZikaron, Israel’s Memorial Day, writer David Grossman addressed an audience of Israelis and Palestinians. He spoke at an ‘alternative’ memorial, not part of the official ceremony of the State.  Bear in mind that Grossman may represent the political left, but he lost a son Uri, during the 2006 Lebanon War.  He spoke about how Israel is not yet a complete home; and cannot be so unless but Israelis and Palestinians can co-exist.  He spoke about the ideal Israel, which is truly a safe haven for all its citizens.

The words which follow reflect the sentiments of many Israelis; and we cannot ignore that fact.  However, even with Grossman’s criticism, please bear in mind:  Nowhere in Arab lands can citizens deliver such a candid and critical message.  Nowhere in the Arab world exists such a freedom to speak openly and democratically.  For me, even in an alternative memorial, for one of Israel’s leading citizens to have the opportunity to openly speak, reassures me that Israel of the future can satisfy the needs of all its people.

Here is an excerpt from his Yom Hazikaron/Memorial Day Speech:

And we Israelis, even after 70 years-no matter how many words dripping with patriotic honey will be uttered in the coming days-we are not yet there.  We are not yet home.  Israel was established so that the Jewish people, who have nearly never felt at home in the world, would finally have a home.  And now, 70 years later, strong Israel may be a fortress, but it is not yet a home…

When Israeli snipers kill dozens of Palestinian protesters, most of them civilians-Israel is less of a home.

And when the prime minister defames and incites against human rights organizations, and when he is looking for ways to enact laws that bypass the High Court of Justice, and when democracy and the courts are constantly challenged, Israel becomes even a little less of a home-for everyone.

When Israel…hardens its heart to the plight of the weak and voiceless-Holocaust survivors, the needed, single parent families, the elderly etc it is less of a home.  I is a dysfunctional home.

And when Israel strips away the Jewishness of millions of Reform and Conservative Jews-again it becomes less of a home.

Home.  Where we will live a peace and safe life; a clear life; a life that will not be enslaved-by fanatics of all kinds-for the purposes of some total, messianic, and nationalist vision.  Home, whose inhabitants will not be the material that ignites a principle great than them, and supposedly beyond their comprehension.  That life in it would be measured in its humanity.

My observation:     Although those on the Israeli right fight passionately for a one state solution, I do not believe that will bode well for Israel’s future. Unless there is a peaceful co-existence, Israel and the Palestinians will be in a constant state of war. Eventually, the Palestinian Arab population will be more numerous than the Israeli Jewish population.

This comment leads into a final article, written by Stav Shaffir, a Knesset member for the Zionist Union.  Shaffir laments the fact that a center-left visionary like the writer A.B Yehoshua announced the death of the two-state solution.  To Yehoshua, a variety of factors has led to his despair: Such as the maniacal persistence of the right wing, the continuation of settlements and the fact that Israeli and Palestinian are fighting for the exact same land.  Shaffir takes issue on a number of counts:

My Observation:     Perhaps it is time for Israel to think out of the box when it comes to peace partners? If the Palestinian leadership will not budge, perhaps Israeli needs to find Palestinians who are willing to talk, albeit clandestinely at first?  Perhaps Israel needs to reach out secretly to Arab neighbors who are slowly becoming more open to a peace agreement (especially with the threat of Iran)?  Despite potential threats against their lives, there are Palestinians willing to talk and to make commitments toward finding peaceful solutions.  There are so many areas of dialogue.  For example, if Palestinians and Israelis could begin dialogue on designing a new approach to Palestinian education; maybe Palestinian children will not grow up believing that Israel is a mortal enemy?  As Shaffir claims, new opportunities for peace will only arrive when a new Israeli leadership embraces new and creative initiatives and visions.